At the 20th anniversary conference of the ToDo Institute I gave a keynote presentation called, “How to Escape from the Prison of Self-focused Attention.” During the first half of the presentation I discussed all of the ways we suffer as a result of being so self-focused. Did you know that research indicates that nearly every psychological problem, including depression, anxiety, paranoia, eating disorders, and more, are characterized by a heightened degree of self-focused attention. In the second half, I talked about strategies for escape and one of the best ways to escape from self-focused attention is curiosity.

Babies are wonderful teachers of curiosity. They are natural investigators. How do you explore the world? When you enter a new home or a hotel room, you mostly use your eyes, don’t you? If you aren’t preoccupied with your luggage or getting connected to the wifi, you might “have a look” around. But babies don’t just look, they engage all of their senses. They touch everything because to a baby texture is interesting. The other day I was at my daughter’s soccer game and I noticed that one of the moms standing next to me was holding a five month old baby. He was staring at me, so I stared back. Then he extended his arms toward me, so I asked the mom if I could hold him. She passed him over to me and he spent the next five minutes pulling on my beard. I read once that the Dalai Lama did the same thing when he met the English comedian Russell Brand. 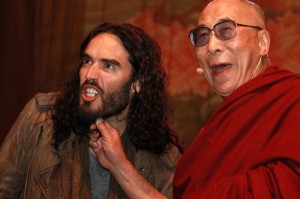 Babies don’t stop with texture. If something is worth touching, it’s worth putting in their mouth. So as a parent, we are constantly following around our toddlers telling them not to touch things, and not to put things in their mouths. And eventually, like many of us, they lose their curiosity and instead spend way too much time thinking about their problems and worrying about what’s going to happen in the future.

Albert Einstein once said, “Most people stop looking when they find the proverbial needle in the haystack. I would continue looking to see if there were other needles.”

There are so many benefits of being curious. First, of course, when we are curious about the world we get some relief from having our attention stuck on ourselves – our thoughts, our feelings, our desires, our body problems. Second curiosity promotes learning, or what Zen Master Shinryu Suzuki referred to as “beginner’s mind.” One of the exercises in the Attention Course I teach is to look at objects throughout the day as if you didn’t know what they were. So here’s the toaster that’s been sitting on the kitchen counter for the past two years, and you notice it before breakfast and walk towards it thinking, “Hey, what’s that?”

A third benefit of curiosity is that it inspires and stimulates us to explore the world and discover new things about it. Columbus was curious about what lay on the other side of the ocean. Jacques Cousteau was curious about the creatures that lived beneath the sea.

The sea, once it casts its spell, holds one in its net of wonder forever.
– Jacques Yves Cousteau

And finally, curiosity gets our bodies moving. Real curiosity takes us beyond internet surfing or scanning a hotel room. And to appease our curiosity we have to use our senses, and therefor our bodies.

Curiosity it about engaging with life. And when we’re engaged with life around us, we find ourselves free of the prison of self-focused attention.

Gregg Krech will be teaching “A Natural Approach to Mental Wellness” – a distance learning course sponsored by the ToDo Institute which starts on Thursday, September 20th.