One Now or Two Later? 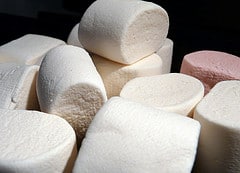 Most of us have heard about the Stanford marshmallow experiment with 4-year olds that was conducted about 40 years ago. That experiment, which has been repeated many times in different cultures, always produces the same ratio between these two groups — two thirds of children tested choose to eat one marshmallow right now. One third is willing to wait 15 minutes in order to get a second one.

The follow-up research with these kids 15 years later reveals some very strong findings. The ability to delay gratification strongly correlates with greater success and happiness in all areas of life. The future-focused group was more successful and happy overall. They did better in academics, athletics, and the arts, and tended to establish healthier lifestyles as well. They did have a tendency to sacrifice quite a bit, for the sake of those future goals – family time, fun time, hobbies, friendships . . .

The present-focused people, however, had no problem being in the present. They tend to be playful, spontaneous and impulsive, following their whims and desires. It was the predictable, monotonous, maintenance of life that they struggled with – flossing teeth, getting exercise, eating well, and so forth. They would much rather embrace the here-and-now than plan for the there-and-then. As it turned out, the present-focused group was least likely to be successful.

It’s pretty clear that we each have a natural inclination when it comes to our time-orientation, but is it a fixed characteristic or changeable? Fortunately, the evidence is very clear. We can resculpt our brains and change our habits with practice and effort. The stronger our habits get, the more natural they feel and the easier they are to sustain.

So exactly what were the marshmallow kids trying to do? They tried to coexist with their feelings, the powerful feelings that a marshmallow can stimulate for a four year old. Only a third of the group could do it for ten minutes or so. The others were tugged by their feelings until they popped the marshmallow in their mouth. Waiting was too uncomfortable, too unpleasant.

One way to strengthen the skill of coexisting with feelings is to participate in A Natural Approach to Mental Wellness. Strengthening this skill can help those who are impulsive use more self-restraint and discipline. It can help us to work on our taxes instead of watch a movie, take a jog instead of a drink, and sit near a plate of brownies without reaching out to grab one. It can also help those who are future-focused to leave work on time and shift into a family mode. Coexisting with feelings can help us to strike that balance, so that we are neither driven nor irresponsible, so that we can both savor and sacrifice, depending on the needs of the situation. It is one of the keys to a satisfying and rewarding life.