The Spiritual Lessons of “White Christmas” 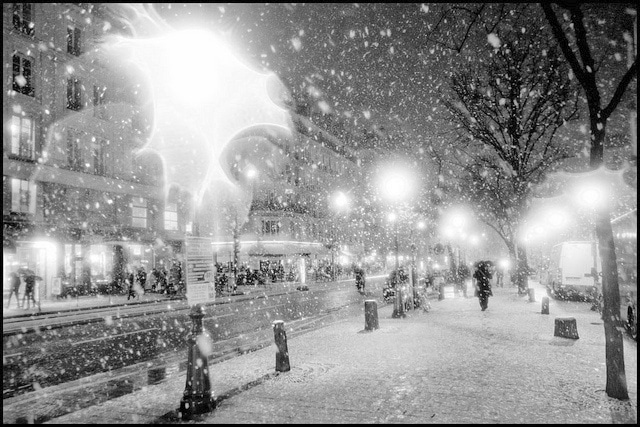 White Christmas is a film my family has watched together since our girls were toddlers.  With Bing Crosby’s voice, Danny Kaye’s comedy, some wonderful music, and great dance routines, it has become a beloved holiday classic.  And much of the story plays out in Vermont!  A few years ago we saw White Christmas performed as a play by the local high school. As I thought about the show, I realized that beneath the entertainment were some very profound spiritual lessons that we can carry into our daily lives.

Count your blessings (not sheep)
Next to “White Christmas”, the song “Count Your Blessings” is probably the most well-known song of this musical. It was actually nominated for an Academy Award in 1954 when the film first was released. The lyrics suggest that when we’re anxious, it’s important to reflect on our lives by looking at ways in which we’re fortunate. In fact, using the time in bed to reflect on our day and consider how we were supported and cared for during the day is a wonderful prelude to falling to sleep. 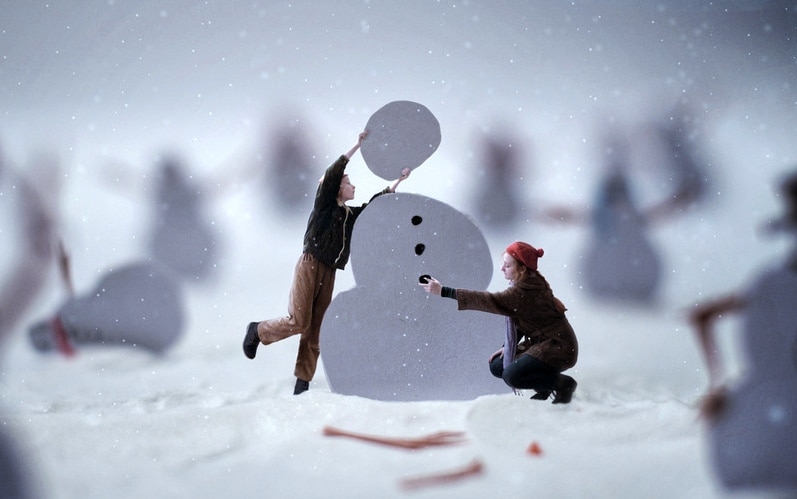 Be aware of the support you’ve received from others
In two instances, the story points to events in the past when  one person has helped another.  Phil (Danny Kaye) saves Bob’s (Bing Crosby) life while they’re serving in the army in WWII. In return, Bob allows Phil to join his musical act after the war. In the second instance, Bob and Phil discover that their former commanding general is running a failing country inn in Vermont. In recognition of the general’s past devotion to men under his command, they plan on staging a Broadway production in the inn to attract some attention and paying customers. There’s a lesson in these sub-plots of not forgetting who helped us get where we are. And looking for opportunities to repay the people who helped us along the way.

Expectations can lead to disappointment
The show’s stars arrive in Vermont by train looking forward to a wonderful snow-filled Christmas scene. But when they arrive, there’s not a snowflake to be found.  When we have specific expectations, we can be blinded to the beauty, richness and uniqueness of what life actually offers us. The key to happiness lays in appreciating what’s being offered, rather than lamenting what’s missing. 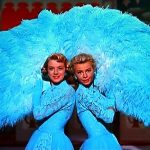 Don’t believe your thoughts.  Check out reality.
One of the main romances in the story is between Bob and Betty (Rosemary Clooney). After a rocky start to their relationship, they seem to be falling in love. But Betty hears some second-hand information that makes her suspicious of Bob and causes her to doubt his integrity. She gets caught up in her thoughts and responds to her feelings. There are some lessons here in handling problems in relationships. If you have a problem with somebody, go to them directly with your concerns. And don’t make big decisions when you’re in an emotionally-charged state of mind.

As it turns out, Betty misinterpreted the information she had been given. She could have caused a lot less grief if she had simply approached Bob and asked him whether her understanding was true or not. Instead she slipped out at night, abandoned Bob and the show, and left for New York, leaving behind a cryptic note. In many cases, when we have problems or difficulties with someone, we avoid discussing it with them directly. Instead, we may talk to third parties who generally aren’t in any position to actually solve the problem. When Bob follows Betty to New York to ask her what’s wrong, she still refuses to have an open, honest conversation with him. This relationship is a lesson in conflict resolution by showing us what not to do. 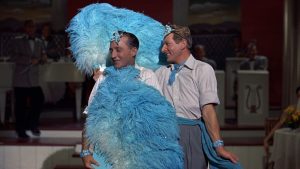 Have fun and don’t be afraid to make a fool of yourself doing it!
At one point in the show the guys perform the musical number, “Sisters”, which was originally performed by Betty and her sister. They pull up the bottoms of their pants legs and use fans that appear to be made from large, blue ostrich feathers. They look absolutely ridiculous, which is why their performance is so much fun. Most of us are much too concerned about how we look to others. We’d all be better off if we could lighten up and be willing to make a fool of ourselves from time to time.

Happiness and joy come from serving others
The main characters  in this film dedicate themselves to helping the ex-general who is in trouble, both emotionally and financially. They sacrifice a great deal of time and money to put on a Broadway show at his Vermont country inn. Bob broadcasts a plea on the Ed Sullivan show for ex-soldiers who were under the general’s command to attend the show on Christmas Eve. There’s no question that the kindness and generosity of those who are helping creates an authentic sense of joy and happiness that’s palpable in the final scene. One of the greatest satisfactions we can know in life is to see that others have benefitted from our efforts.  It’s a theme in the film that would be applauded by Albert Schweitzer and Mother Teresa.

White Christmas is a holiday film that was created to entertain. But beneath the music and humor there are some wonderful life lessons to be learned. If you know the movie and you have a “lesson” you’d like to add, post it in the comments box below. If you haven’t seen it in a while, try taking a fresh look.

Have a wonderful holiday season!

Gregg Krech has been teaching Japanese Psychology for the past 32 years and is the author of several books, including, Question Your Life. and The Art of Taking Action.  He will be conducted an online course — Living On Purpose: Starting the Unstarted and Finishing the Unfinished — beginning on January 8, 2022.