What Prevents You from Appreciating Your Partner (and a lot of other people)? Hint: It has to do with gorillas 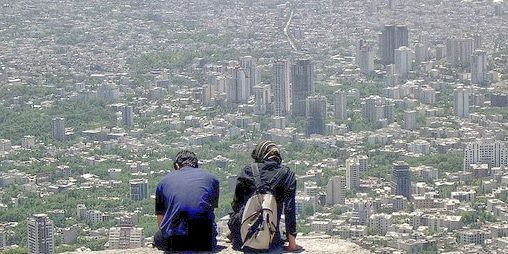 Are you familiar with the “invisible gorilla” experiment?  A group of people were asked to pass basketballs back and forth to each other.  Three of the people wore white t-shirts, and the other three wore black t-shirts.  Participants in the study were asked to count the number of times the basketball was passed between the members of the white t-shirt team.  During the experiment a person in a gorilla suit appeared, pounded his chest, and walked away.  Only about 50% of the people who observed the experiment noticed the gorilla.  This has to do with selective attention.  When we’re looking for a something in particular, we tend to be inattentive to anything that fall outside that object’s characteristics.  It’s hard to imagine that anyone could observe this experiment and not see a gorilla that walked right through the center of the group.  But half the people were so focused on keeping track of the basketball, that they simply didn’t see the gorilla.

The phenomenon of missing something right in front of you is sometimes known as “inattentional blindness”.

More recently, another researcher, Trafton Drew, a post-doctoral fellow who studies attention at Harvard University, conducted another attention study that also involved a gorilla.  This time, the subjects were radiologists.  A group of highly qualified radiologists were given slides of a patient’s lungs and ask to review the slides for indications of cancer.  A picture of a gorilla, shaking his fist, was inserted into one of the slides. 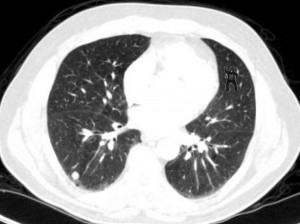 After the radiologists reviewed the slides, they gave their report.  Amazingly, 83% of the radiologists didn’t see the gorilla.  They were unable to see they gorilla even though they scrolled past it an average of 4.3 times. Using eye-tracking technology, researchers found that out of the group of radiologists who did not see the gorilla, 60% had looked directly at it.  Now radiologists are professionals who get paid to pay attention.  Their jobs involve noticing even the most subtle deviations that might indicate the presence of cancer.  And these radiologists were all Board-Certified.  So how could they miss a picture of a gorilla?  Here’s what one of them said:

I’m a radiologist. Air on xray/CT is black. The gorilla in this CT image is black. Black things in the lungs usually have no clinical significance. Cancer is white. Pneumonia is white. Acute disease (other than a collapsed lung) is white. A collapsed lung is not in this location. While the “fact” that all the radiologists missed the gorilla may be shocking to lay people, the reality is that, given appearance/location/etc in this “experiment”, it just doesn’t matter.

So the radiologists are looking for white, but the gorilla is black. Selective attention.

Now what does this have to do with your relationships to family and friends?

If you’re living with someone, no matter how sweet, caring, intelligent and beautiful they are, it’s not long before you notice something the person does to aggravate you.  Maybe they leave the toilet seat up, or they make the coffee too weak.  Or you’re constantly tripping over their slippers.  As you notice these little (and not so little) incidents, you begin looking for them.  I’ll give you an example.  We have a piano in our house, a black Kawai upright piano.  We keep a long, soft red cloth over the keyboard when it’s not being played.  The cloth keeps the piano keys from getting dusty.  My younger daughter regularly forgets to replace the cloth on the keyboard.  So either I have to remind her, or I just do it for her.  But now, when I hear that she is finished playing, I automatically glance at the piano to see if she replaced the cloth.  Actually, I’m looking to see if she didn’t replace the cloth.  Over time, our attention naturally gravitates towards searches for the problems that the other person is causing us.  We’re looking for the problems caused by the other person, just like the radiologist is looking for cancer in the X-ray.  The radiologist is missing the presence of a gorilla.  What is it that we’re not seeing?

We’re not seeing all the things the person does to support and help us.  My daughter let our dog out this morning.  My wife put an extra blanket on the bed.  She also put my coffee in a travel mug when I was leaving to drive into town.  And, now that I think of it, she must have filled the car with gas yesterday.

According to neuroscientist Rick Hanson, our brains have a negative bias.  They are designed and wired to notice problems, challenges, threats and obstacles.  That applies to people, as well.  And while we are noticing the negative attributes of the people around us, we’re missing the positive ones.  They just don’t make an impression anymore.  Instead, we may see our spouse as difficult, selfish, lazy and unhelpful.  We’re convinced this is an objective fact.  But is it?  Or are we just missing the gorilla, because we’re too busy looking for cancer?

One important footnote to the experiment.  After all the radiology reports were done, only 55% of the cancer was successfully identified.  Even with experienced, well trained professionals, nearly half of the cancer went undiagnosed.  So the next time you have x-rays, it might be a good idea to get a second opinion.  And when you find that you are very successful in noticing all the problems your partner or colleague is causing you, that’s also a good time for a second opinion.  You can get that opinion without asking someone else.  Just take some time to “look for” how you are supported by the other person, and, at the end of the day or week, make a written list.  Be specific. This is actually a method of Japanese Psychology called Naikan.  It promotes gratitude and appreciation instead of blame and resentment.  That’s a worthwhile trade and a great investment in your relationships.

You may find that your feelings and attitude toward the other person are influenced by what you notice and don’t notice.  What you pay attention to grows.  All these people in our lives – husbands, wives, kids, colleagues, parents – aggravate us.  There’s no question about that.  But here’s a more important question: What are we not paying attention to?

Note: Here’s a link to the “The Invisible Gorilla” experiment conducted by Christopher Chabris, an assistant professor of psychology at Union College in Schenectady, N.Y., and Daniel Simons, a professor in the department of psychology and the Beckman Institute at the University of Illinois.

When It’s Raining and You Have an Umbrella Use It – Dr Shoma Morita
August 9, 2022