I am basically a can-do kind of person. When my husband of eighteen years said he preferred our next door neighbor as a companion, I used up several tons of Kleenex and lost three dress sizes. Ultimately, with the help of many friends, I figured out how to get my tires balanced and use the TV remote. When a remodeling contractor gave me a five figure estimate for removing a wall prior to remodeling, I borrowed his ten pound sledge hammer and had the wall on the curb in 72 grocery bags three weeks later. But last summer I faced a task that did not seem doable – 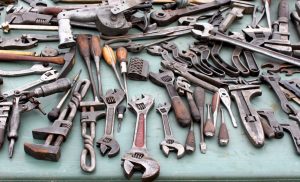 to clean out and rent my father’s home.

The home, which I checked on regularly, is located on the banks of the Suwanee River. It had stood vacant for the eighteen months since my father’s stroke left him partially paralyzed and mute. In some ways it was a museum to his memory. The cracked leather flight jacket was still draped over the back of one of the ladder back chairs. The camouflage overalls, hats and shirts were still in the laundry basket where he had placed them the morning of the stroke. Waist high stacks of Senior Golfer magazine sat by the T.V. chair as did equally large stacks of NRA Today. Most horizontal surfaces sported baseball caps with logos ranging from Pebble Beach Golf to Shirley’s Bar-B-Que. One entire garbage can was filled with . . . Reader’s Digest prize bulletins. The house was waiting for the Captain to come back.

But the reality was that the Captain wasn’t coming back. The doctors had examined him and one by one each shook his head when my sisters and I asked about his prognosis. And so the three of us put together a plan for his care. Gincy, my youngest sister, would completely retire from dental hygiene and become the daily care giver paid by Dad’s pension. Retta, who lived farthest away from the family, would serve as medical translator since she was a nurse practitioner and was therefore fluent in doctor-speak. I would handle finances and do relief hands-on care.

And the plan worked. I pawed through checkbook stubs and figured out where my father’s money came from and where it went. I thanked the lawyers who had encouraged my father to grant me power of attorney long before the stroke. A friend who had trod the same path with her father suggested I buy a copy of The Beneficiary Book, a financial notebook which provides pages of understandable questions to clarify an individual’s financial picture. I purchased it. It was a lifesaver. Indeed, it was such a powerful resource that I bought a copy for myself and gave copies to both of my sisters. Indeed, once my purpose became obvious – to clarify and conserve my father’s finances – reality provided the needed information.

But somehow the house was a different story. Perhaps, part of my reluctance to clean it out was magical thinking. If I left the house just the way it was, perhaps my father would heal and come back to it. Part of it was slothfulness. There were, after all, enough magazines to fill a semi-trailer truck, not to mention the gross of yogurt containers and duck decoys. How was I ever going to deal with all of that?

Then, something a colleague said began to echo one day after my daily Naikan reflection. Think of all of the people who can use those items that you are saving. You are not simply keeping things together. You are keeping others from using them. And that was true, because in addition to an entire refrigerator of turkey calls, my father had sofas and chests and tools, all in very good condition. Somehow the observation about the world at large helped shift my focus from the stultifying, “How on earth will this ever work out?” to “What is the first step?”

Gingerly I put out the word that I would be renting the house. I told the postmistress and I tacked a 3 x 5 card up on the grocery store’s community bulletin board. I did not expect that anyone would actually want to live two miles “off the hard road” with Holsteins as the nearest neighbors and an occasional alligator who dropped by to “do lunch.” Reality proved otherwise. Within two days I had a newly minted Episcopal deacon who was assigned to the tiny mission church in town. She, in turn, helped me clean out the house and find homes for the numerous items no one in the family wanted. Indeed, even the waist high pile of Senior Golfer magazines were welcomed at an Elderhostel center.

The moral of this tale is one that I need to have tattooed across my forehead. Action brings experience; experiential knowledge is dependable. For the months leading up to the house cleaning, I over planned and underacted. My imagination painted dramatic scenes of despair as I sifted through the former life of the father I loved. And yes, there were some wet-cheeked moments, but basically these were more than offset by the knowledge that someone who needed a house now had one, several dairy hand families had new furniture, and at least one young man who helped with the clean-up stomped down the driveway to his pickup truck wearing Dad’s favorite baseball cap, the one that read, “Cats are a waste of fur!”

So now I’ve shared Dad. Even when his body had lots of limitations, he could still do a lot of good.