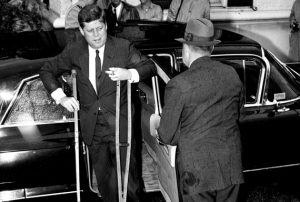 JFK is one of my heroes. He would have been 99 years old on May 29th, were he still alive today.

Like most of us, Kennedy was not always admirable. He was a flawed human being and his failings are well-known. But his determination, courage and wholehearted efforts to make a contribution, despite debilitating pain and illness, are inspirational. His extraordinary and unwavering will could not be defeated.

Kennedy suffered from many simultaneous conditions, including Addison’s Disease, colitis, ulcers, allergies, a susceptibility to infection and degenerative back disease. Of course the fact that his medical conditions were kept private is a legitimate issue of its own, but not the subject of this essay.  I am interested in his extraordinary ability to wholeheartedly participate in life, despite the intensity of his personal suffering. And of course his was not an ordinary life. That, in itself, would have been inspiring, given the magnitude and nature of his health problems. But he was participating on a global stage, with the highest of stakes, facing pressures that most of us cannot even fathom, pressures that would challenge even the fittest and healthiest among us. That is a demonstration of courage and heroism in my book.

We all know about Kennedy’s chronic back condition, for which he always wore a corset-like back brace. It it now clear that he often used crutches when not in the public eye. But in addition to his orthopedist, he was under the ongoing care of an allergist, an endocrinologist, a gastroenterologist, and a urologist. “He received injections and ultrasound treatments and hot packs for his back. In addition to other prescribed medications, he took Lomotil, Metamucil, paregoric, phenobarbital, testosterone, and trasentine to control his diarrhea, abdominal discomfort, and weight loss; penicillin and other antibiotics for ongoing urinary-tract infections; and Tuinal to help him sleep.  He would sometimes receive painful injections immediately before making a public appearance, in order to be able to walk with greater ease to the podium, or to handle the physical demands of a situation.  Before press conferences and nationally televised speeches his doctors increased his cortisone dose to deal with tensions harmful to someone unable to produce his own corticosteroids in response to stress.” (The Medical Ordeals of JFK, The Atlantic)  And there are some who suggest that heavy steroid and testosterone treatments throughout his life may have even played a role in his legenday history of womanizing.

“This is the true joy in life, the being used up for a purpose recognized by yourself as a mighty one; the being a force of nature instead of a feverish, selﬁsh little clod of ailments and grievances, complaining that the world will not devote itself to making you happy. I am of the opinion that my life belongs to the community, and as long as I live, it is my privilege to do for it whatever I can. I want to be thoroughly used up when I die, for the harder I work the more I live. I rejoice in life for its own sake. Life is no “brief candle” to me. It is a sort of splendid torch which I have got hold of for a moment, and I want to make it burn as brightly as possible before handing it on to future generations.”
— George Bernard Shaw