Do the Wrong Thing

Home 2021 February Do the Wrong Thing 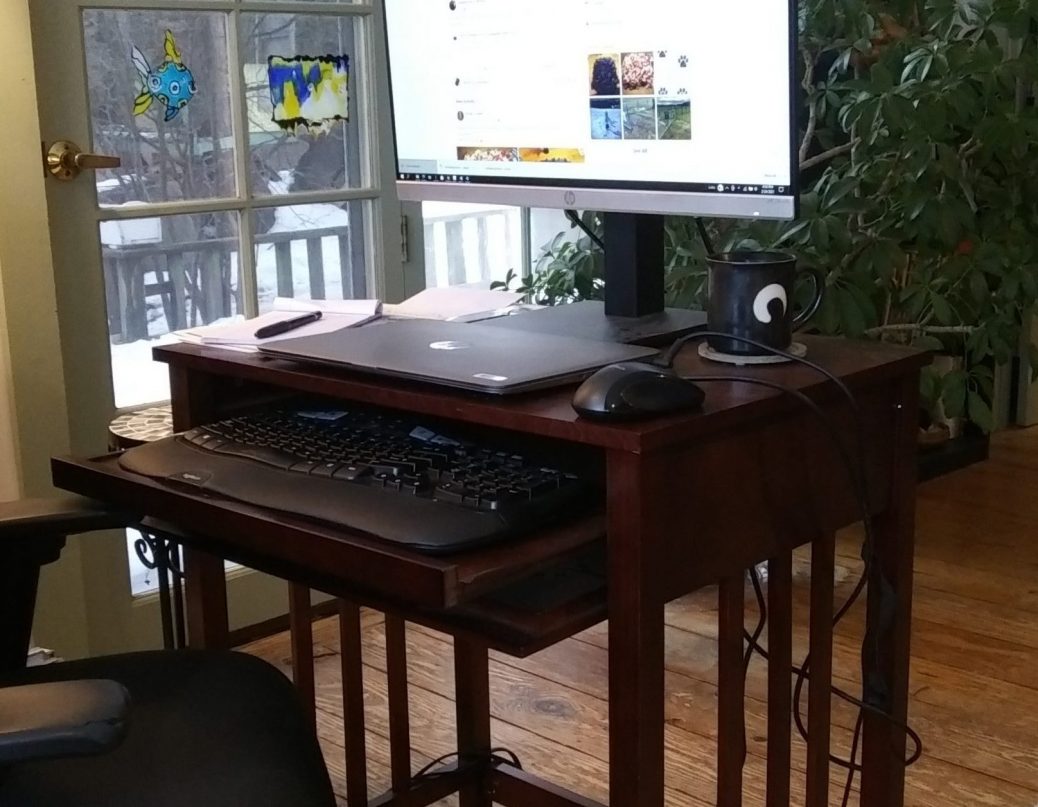 Do the Wrong Thing

For many reasons Gregg likes to work in the living room, particularly in the winter.  The dancing flames from our wood stove warm both his body and spirit. Our south-facing living room is often flooded with sunlight (yes, we have plenty of sun here in Vermont, despite what the statistics might lead you to believe.) And thanks to our bird/squirrrel feeders, he has ongoing entertainment from our wild extended family members, as they fly, crawl, jump, chase, nibble warble, perch, flutter, pose and scurry. Between enjoying the fire, the sun, and the critters, it’s amazing that he is so productive.

But working in the living room has distinct drawbacks as well, the primary one being that the space does not contain a desk, nor does it have an obvious place for a desk. Between the wood stove, the deck door, the piano and our open layout, there is simply no available wall space, so Gregg has been working from the couch.

Though that may sound kind of comfy and dreamy, the truth is that our couch presented an ergonomic nightmare that was poised to play out in Gregg’s neck and/or back.  I wanted to do something to address this problem, but I had no idea what to do.  A perfect procrastination scenario.  This was the case for about six months.  No ideas and no action.

But one day I decided to put my foot down, right in my mind’s eye where that desk should have been.  My days of inaction were over.  It was time to do some thing . . . even if it wasn’t the right thing.

I began by brushing up on my ergonomic understanding.  The forearms should be parallel to the floor, and the screen should be level with the gaze.  I found a local ergonomics center that I made note of, as a possible resource.  Was there some kind of lap desk that could offer this arrangement for the couch?  Was there some kind of special chair that could provide a good framework?

After diddling around with these unlikely ideas, I noticed a little ad in the corner of my screen for a small and simple desk. It was extremely compact, but it had a pull out drawer for the keyboard, and a small side shelf that could hold a cup of coffee.  I checked a few reviews and bought it on the spot. Action taken!  Something trumped nothing at last.  Though I was not at all confident that this desk was the ultimate answer, I knew that it would get me unstuck and move the process forward.

When the desk arrived a week later, Gregg was completely surprised. He quickly got on board with the basic plan of setting up a small desk near the deck door, but the desk I had ordered was not a good fit for him for various reasons.  He didn’t like it, so I returned it.

But I wasn’t going back to square one.  Far from it.  In fact, most of the work was already done.  The challenging part of the process was just jumping into the confusion about how to address the problem.  All we had to do at that point was find the right little desk, so that’s what we did.  I’ve included a photo of Gregg’s handsome little desk.

The point is that I couldn’t envision the solution until I actually got out of neutral and into first gear.  Intellectual wheel-spinning is like sitting in your car while the gear is in neutral.  Your mind spins, but the wheels don’t.  We encounter the same mental dead ends over and over, which makes the problem seem unsolvable.  But by taking action, and engaging with the world in some way, we introduce new possibilities.  So doing the wrong thing becomes a path to the right thing.

Don’t be deterred if the process feels messy.  The messiness is a sign that you’re wandering in new territory, where you may stumble upon an essential clue that helps to solve the problem.  It  suggests that you’re out in the complex world, rather than remaining in the limited confines of your mind. Enjoy the scenery on your problem-solving path, with all of its meanderings and detours. As long as you stay engaged with the world, you’re on the right track.

So here’s to blundering ahead and getting unstuck. Here’s to the courage it takes to make mistakes, and the patience it takes to do the next thing.  And here’s to doing the wrong thing instead of no-thing.