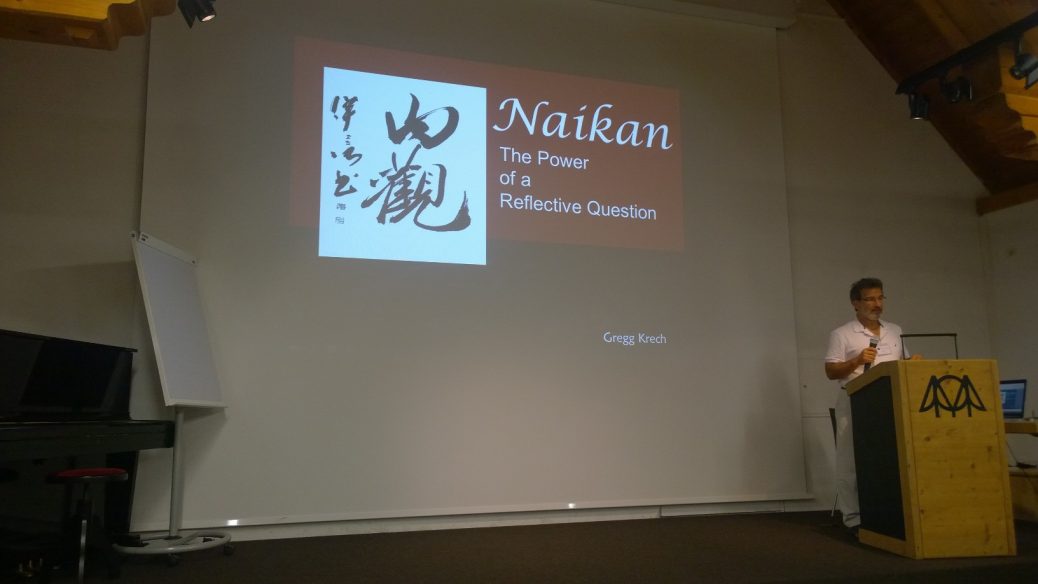 THE QUESTIONING SPIRIT
by Gregg Krech

The renowned Indian pandita,  Aryadeva, was the principle disciple of the great Buddhist teacher, Nagarjuna.  Aryadeva once said that to merely question that things might not be as they seem can shake the very foundation of habitual clinging.

This questioning spirit is the starting point for self-reflection.

When you first came to do Naikan reflection, what was your story?  Were you neglected as a child?  Were you abandoned?  Was your father evil?  Was your life ruined by your first husband or wife?  Is it that you spent so much time taking care of everyone else that your own needs were ignored?  Are you a victim?  My story was family violence.  What was your story?

Did you question your story?  It’s not easy.  For some of us, that story was a big part of our identity.  We do not easily give it up.  If we give up our story, who are we?  If you were no longer a victim, who would you be?

Yet somehow, there was a spirit inside your heart that led you to question your story.  That spirit was not something you created.  It was a matter of grace.  And you were given three questions.  Three simple questions.  Questions so simple that even a five year old child could understand them.  So you took 100 hours answering these simple questions – year by year, person by person.  And what happened to your story?  What did those questions and your questioning spirit do to the story that you held on to all those years?

There was a 55 year old woman named Alice who hated her mother.  This is what she wrote:

“I rarely took pains to disguise my contempt and resentment toward my mother.  I decided that the vast gaps in my memories of childhood were due to the abuse and neglect I must have experienced.  At times I was barely civil.  I can remember angling my chair so as not to have to look at her while dining together.  Just seeing my mother’s face stimulated feelings of judgment and self-pity.”

Alice heard about Naikan and came to a Naikan retreat.  She was willing to question her story.  Somewhere in her heart was a questioning spirit.

But when we do Naikan that question is turned upside down:
What is it like for my mother to have me as a daughter?

This is a frightening question, isn’t it?  Just turning this question around can create knots in our stomach and bring tears to our eyes.  Do you remember when you first considered this question about your own mother?  What was it like for her to have me as a daughter, or as a son?  Were you able to taste the suffering and anguish your mother had gone through from the ways you had treated her or neglected her?

After Alice finished her Naikan retreat, she wrote:
“My well-practiced story about my deprived childhood had taken a beating.  I had to face the inconsistency between my view of myself as a good, loving person, and the indifference and cruelty I had dealt to my mother.  My image of the ideal mother had blinded me to the mothering I had received. Her support was there all along, but it didn’t really register as long as I was preoccupied with my mother’s deficits and my own misery. I was now a mother myself.  I could easily imagine being on the receiving end of judgment and contempt of my own daughter.”

Before Alice’s mother died, a few years later, Alice made a scroll for her with a list of 100 things that her mother had given to her and done for her.  She sent this scroll to her in a tiny box.  She apologized to her mother for being unkind and neglectful.  The tension between her and her mother faded.  Just before her mother died, they were able to hug and hold hands.

All this was possible because of questions.  Because of the simple act of holding a question in our heart and answering it with sincerity.  Because she was able to connect with her own questioning spirit.

There is a well-known Buddhist teacher by the name of Pema Chodron.  She says:
“It comes as quite a shock to realize how much we’ve blinded ourselves to the ways in which we cause harm.  Out style is so ingrained that we can’t hear when people try to tell us, either kindly or rudely, that maybe we’re causing harm by the way we are, or the way we relate to others.  We’ve become so used to the way we do things that somehow we think that others are used to it too.”

The actual practice of self-reflection requires us to step back, examine our experience, and not succumb to the momentum of the habitual mind.  This allows us to look without judgment at whatever arises, and this goes directly against the grain of our self-importance.

We can bring the questioning spirit of self-reflection to any situation, at any time.  Self-reflection is an attitude, an approach, and a practice.  In a nutshell, it is a way to make practice come alive for us in our own hearts and lives.