Morning of the Spider Webs 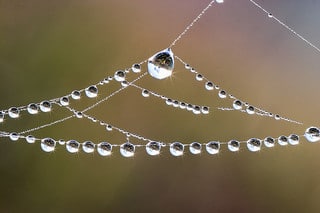 It seemed an unlikely morning for miracles. As I woke and glanced out toward the valley, I saw that a thick layer of fog had wrapped our windows in gauze. The nights in Eagle River were growing cooler now.

The back door slammed and my husband called for me to grab my camera and come outside. “You won’t believe this,” he said. I grabbed the camera and long lens and pulled on a coat, watching my feet as I headed down the short, steep trail to the river through the dense fog. Suddenly, I bumped into my husband. He was looking to the trees.

I tilted my head back, focusing my eyes. It was a perfect spider web. But not just some pale wisp. The heavy morning dew and quality of light had turned an otherwise invisible spider web into thick, white lace. The threads, the design, the intricate waving held me spellbound for a moment. Slowly, my eye traveled toward the center, where a tiny yellow spider sat, waiting.

“But that’s not all,” Steve said. “Look, they’re everywhere!”

I looked away and then I saw them-—hundreds of webs, swinging between the branches of spruce trees, high and low. We could see the long threads where the spiders had “jumped” from one branch to another far away. There were so many filaments and webs surrounding us we couldn’t move without disrupting on or another. On other morning walks, I’d felt these webs as they hit my cheek out of nowhere, and brushed them away. But I never would have imagined there were so many and that they were so intricate.

“Look in the bushes,” Steve said.

Thick stands of Labrador tea bushes lined the edge of the river bluff. I’d wandered between them almost daily all summer as I walked the dogs. But this morning, the bushes looked like they’d been invaded by ghosts. Tiny domed heads rose out of the shrubs everywhere.

I crouched and saw that they, too, were spider webs—-but ones that employed a completely different architecture. Thousands of tiny strands were suspended from the leaves to form small cocoon like caps. Deep in the center of one such masterpiece sat a tiny spider, no bigger than an eighth of an inch. The longer I looked, the more amazing the spider’s structure became.

“How do they know how to do that?” I whispered.

“I wonder how long it took,” said Steve, a builder himself. “Look at how they had to anchor that.” We examined this web for a long time.
“They’ve always been here,” I said.

“We just never saw them before,” Steve replied.

The bushes were so thick with these domed caps that I almost had to laugh. How could we have missed them?

There was yet another surprise. I finally let my eyes drift to the ground and there, among the lichen, low-bush cranberries and dogwood, was yet another type of spider web, stretched like a white trampoline at the front and ending in a dark, sinister-looking tunnel. When I let myself look around at the ground now, these webs seemed to cover the floor of the forest, until it seemed I couldn’t take a step without destroying one.

There weren’t words anymore. We just wandered down the rail, dipping under strands of spider webs above us, beside us, below us, trying to take it all in with our eyes—-and snapping pictures just to prove to ourselves that it was really true. The sun poked through the gauzy fog and the webs shone even brighter.

“I’ll bet those spiders are mad as hell for being exposed,” Steve said, laughing.

We walked and crouched and called to each other to see yet some different web that seemed just a little more beautiful and unique that the last. The sun grew brighter and we hurried from one to another, feeling that the clock would soon strike 12 and the dew would dry and it would all disappear.

Two hours later, Steve and I walked silently back up the rail, feeling humbled by tiny spiders and their dew-laced webs. And I wondered: What else in our lives lies beautiful and fragile right before our eyes—-but that we’ve never been able to see?